Carla Thraves is a British actress (playing age 35-45) and can speak Spanish. She has worked as a professional actress for 12 years in the UK, Spain and Italy. Actor training includes The Oxford School of Drama in the UK and a private masters in ´Acting for the Camara´ at Central de Cine in Madrid, Spain.

After acquiring a BA Drama and Dance degree (1st class) from 'The University of Surrey', and working in BBC production for 3 years, Carla received a scholarship to train as an actress at The Oxford School of Drama, selected by the BBC as one of the UK’s top five drama schools. Memorable roles include Sarah in 'Easy Virtue', Julie in 'Miss Julie', Mrs Gibbs in 'Our Town' and Julia Browne in 'After the Dance'.

She went on to tour several shows to Italian schools for 3 months including 'The Addams Family' and 'Peter Pan' with Teatro Senza Frontiere. This was closely followed by a 6 month UK national tour of devised work 'Flightcases' into community venues, including facilitated school and prison workshops, in addition to evening public performances. She continued with Riding Lights, devising and then touring detective comedy 'Pipe Dreams' for 3 months as office geek Digger amongst others. Other theatre work includes Jules in 'Wasted' (drugs T.I.E. tour) and Lee in Musical Theatre comedy 'Cowgirls'.

Screen credits include two BBC Crimewatch UK dramatic reconstructions where she played the Family Liason (police) Officer and Victim respectively; the title role in short film 'Foxy'; Kayleigh in 'Lumi'; News Reporter in 'Comet'; and Mad Sally in experimental short film 'Mur Plus' in addition to a range of roles in corporate filming work.

Carla developed her acting career in Spain for the next 6 years. Based in Madrid, she worked and toured with Face to Face, Chameleon Theatre Company, Animaciones Cabali, and Kram Theatre, in addition to writing and performing her own shows with her own company Carlas Cuento's. She has also acted in corporate videos, web-series and as a voice-over artist in films and educational software. Related work includes Master of Ceremonies with Vaughan Town and teaching and directing theatre for ACTion English including giving theatre and presentation workshops in EOI business school. She also enjoyed organising variety shows for the charity 'Serve the City' and writing and directing The Enchanted Thread for Aslan Performing Arts Centre.
​
She can currently be found in the USA, where she is developing spiritually, and professionally through acting and film-making courses at BSSM in Northern California. She most recently acted in the web series "To Belong' by Chaos2Love Productions. 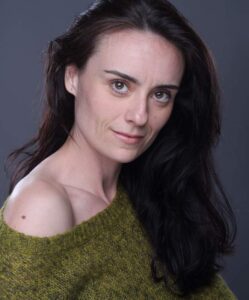